Cumulonimbus Clouds: Everything You Should Know

If you’ve ever seen giant columns of towering clouds, you’ve seen cumulonimbus clouds. They’re sometimes called thunderheads because they’re often observed when there are thunder and rain, and if ever there was a cloud more suited to be called a thunderhead, we’ve never met it.

Cumulonimbus clouds can tell us about more than just thunder, however; they might also tell us about climate change. Scientists have been looking to these clouds for answers now for decades–keep reading to learn more about what they’re uncovering.

What is a Cumulonimbus Cloud, Exactly?

You can check out some of the most common types of clouds in this infographic. They include:

What Does a Cumulonimbus Cloud Tell Us About the Weather?

The Birth of a Cumulonimbus Cloud

In a tropical thunderstorm condition where there’s a ton of heat and moisture, cumulonimbus clouds may dissipate and then build again over and over again. While the length of each stage depends heavily on atmospheric conditions, most of the time each stage lasts about half an hour. 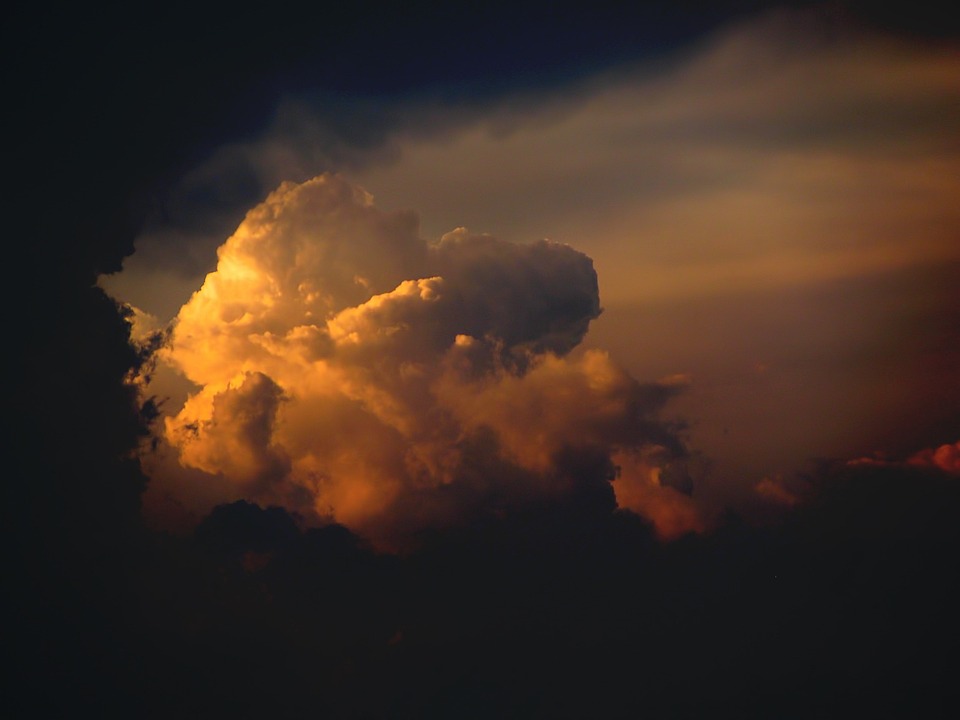 They don’t have defined borders or shapes, and they change pattern quickly. They’re also hard to collect data on. Clouds cover an incredible 70% of the earth’s surface–that’s an incredible amount of cloud coverage to track at any given time!

And it’s not just the presence of clouds, themselves, that scientists must track to understand them better; scientists must also track the atmospheric height of the clouds, the density, and the particle accumulation. Clouds can also stretch for miles or just a few millimeters and even be as high up as twelve miles.

What is a Cloud?

Unfortunately, it’s an oversimplification to say that clouds are simply rain or water. They’re not! They are mostly made of water vapor, but that water can take many different forms. Plus, clouds interact heavily with the weather around them, be it wind, heat, a lack of sunlight, turbulence, huge weather systems that include snow, rain, or hail, other clouds, and more. Clouds may also be composed in part or entirely of aerosols. Aerosols are small particles such as pollen or ash that remain suspended in the air above the earth, mixing with clouds or forming their clouds.

The NASA ORACLES Project and How it Impacts What We Know

Common aerosols include dust from deserts like the Sahara desert in Africa, pollen, sea salt, sulfate particles emitted from power plants, and ash. In 2017, NASA began a five-year research mission called the Observations of Aerosols above Clouds and their Interactions, also known as ORACLES. It flew a research plane in the South Atlantic to study the convergence of two aerosol systems: smoke from agricultural fires in Africa and low-lying clouds.

Since aerosols can vary so much regarding their response to sunlight (whether they reflect sunlight or bounce it back to the sun) and whether or not they encourage cloud droplets to form, scientists don’t yet know a lot about how they impact weather patterns. Can their presence cause rain to form in existing weather patterns, for example? How they interact can have warming and cooling effects, further impacting the weather and the climate.

While greenhouse gasses are easier to spot and understand because they stick around longer, aerosols have been notoriously difficult to include in accurate climate models, making more projects like ORACLES necessary. In the meantime, their presence simply underscores the difficulty of coming to a complete understanding of cumulonimbus clouds and their impact on climate change.

Do Clouds Warm or Cool Our Planet?

In a 2017 article published by NASA’s Jet Propulsion Laboratory’s Carol Rasmussen, Rasmussen explains that clouds have both a warming and a cooling effect on our planet. They block the sun from warming land and water masses while simultaneously blocking heat from escaping the atmosphere.

This depends, of course, on the type of cloud. Stratus clouds, for example, tend to block the sun so completely that they have a cooling impact on the atmosphere below.

Cirrus clouds, on the other hand, let so much sunlight through while simultaneously managing to keep heat from leaving the atmosphere that they have a warming effect–not what you want for a globe that’s already warming. Cumulonimbus clouds can have both a warming and a cooling effect–a lot depends on how thick and tall they are.

The net effect, however, is a cooling one, which makes clouds of great interest when it comes to concerns related to global warming. However, when this importance is combined with the difficulty in understanding clouds, what you get is what the National Science Federation calls the “wild card of climate change.” Scientists go back and forth on which models and which information to trust, as well as how to interpret new data.

Too Soon to Tell?

Nearly twenty years, for example, NASA used its Terra satellite’s Multi-angle Imaging Spectroradiometer (MISR) to begin fifteen years of cloud-measuring. Nine cameras took cloud images, and after the first decade, the results were analyzed by professors of climate physics who concluded that it seemed likely that cloud heights were getting lower.

Five years later, the same data plus the extra five years’ were analyzed cumulatively and the new data led researchers to conclude that there was no discernible trend yet. Research continues, but most scientists involved in the project believe it will take decades more to fully understand trends.

If scientists can nail down the impact of clouds and things like aerosols, they can better predict the rate of global warming. Right now, they’re hampered by not fully understanding what’s at play. For example, some scientists believe that while clouds have a net cooling impact, the amount of impact won’t be large enough to offset the total warming effect the globe is currently experiencing.

​Cumulonimbus: Are Clouds Our Last Hope?

One way or another, clouds will continue to play a vital role in the survival of our planet and life as we know it. As scientists continue to study cirrus, altocumulus, cumulonimbus, and other types of clouds, they hope to be able to paint a more clear image of how our climate will change in the next century. In the meantime, we’ll continue to enjoy–and be wary of–those beautiful, majestic cumulonimbus clouds and the wild weather they bring.

This site uses Akismet to reduce spam. Learn how your comment data is processed.